Popular Roof Designs: What You Need to Know

Unless you are a professional roofer, or an architect or designer, you probably haven’t given much thought to roof designs and all of the different shapes a roof can take.

You may have driven through old neighborhoods and noted some more elaborate shapes.

Maybe you have even wondered what some of those shapes are called. We want to give you an overview of some of the most popular roof designs and shapes out there, and give you an idea of how each of these shapes works.

While there are many variations on the gable roof, this is the most commonly used style of roof found on many homes and buildings all over the world.

This is the type of roof a child will usually draw, with the two sides of the roof coming together in a point in the middle.

The vertical section in between the two sides of the roof is called the gable.

Some variations on the gabled roof include:

Hip roofs slant down on all four sides and form a single ridge.

They tend to look balanced and therefore, have been used in colonial-style buildings.

In their purest form, they are without any valleys where leaves and debris can collect, making them relatively easy to maintain.

In addition, hipped roofs can also be found on many mid-century modern buildings and houses. However, in this variation, they have a low pitch.

Hip roofs can be combined with gabled roofs when the house is L-shaped, or they can be formed into a hip and valley roof when the structure isn’t a simple rectangle. Half-hipped roofs have two shorter sides.

A gambrel roof is a roof you might picture on a big, old barn.

It’s a type of gabled roof because it leaves two sides vertical. However, each sloped side is broken into two sections.

These roofs are common to Dutch building tradition, which is why you find them in old houses and barns.

Gambrel roofs make the most use of attic space. 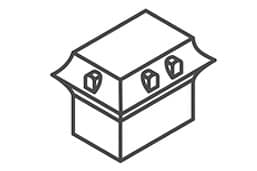 Mansard roofs have a bottom section that slopes quite steeply and looks almost vertical. This makes it appear as though the top half of the house is covered in shingles or other roofing material.

Curved roofs can be in the general shape of a gable or a hip roof. However, they are made intentionally curvy to look like a thatched roof.

Curved roofs can also be in a dome or half-dome shape.

Think of a shed roof as half of a gable. It only slants one way.

It could also be called a lean-to roof. Unless you are looking at a very modern-style home, you are most likely to find a shed roof on a dormer.

Modern style homes may have a shed roof that is one sloping plane or a clerestory roof.

A clerestory roof has two sloping planes that don’t meet up in a single ridge. Instead, one section of the building is higher than the other.

Additionally, windows are often built into the part of the wall just above the roof of the shorter half.

We have covered flat roofs many times on this blog. This is mainly because flat roofing is one of the significant components of our business in commercial roofing.

The next time you are driving around, take a look at the roof designs of the houses and buildings around you.

If you remember these styles, take a minute to appreciate the artistry and hard work that went into building and maintaining these unique structures.

Finally, it your house or building is located in Southeast Michigan and you are in need of roofing, please give us a call. We would be honored to help!